skip to main | skip to sidebar

Post where I atone for my absence with photos 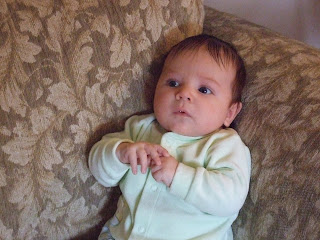 So...it's been a while. I fear this will be a trend on my blog. Nonetheless, I will attempt to encapsulate our going's on for the past 4.5 weeks or so. And as a bonus - pictures!

Teddy is getting bigger and bigger -- at his last check-up two weeks ago, he was 12lbs and 15 oz. He is a sunny child; the only time he really cries is when he is hungry whereupon he LOSES HIS MIND. He comes by his hanger honestly -- Dave is the same way (more snapping, less crying). He loves to smile and coo, attempting to have a conversation with you. He is a good sleeper, too, and will fall asleep fairly easily if you put him down drowsy or not. We are really, really lucky -- he is a doll.


Teddy's presence was an absolute godsend early last month when my Aunt Floriana passed away. Aunt Flo had been in a long term care facility for 3 years, having had a massive brain bleed in March of 2006 at the age of 47. While it was no surprise and we are all glad that she is no longer suffering, it was a difficult time. My Nonna has been especially hard hit; the baby was a ray of sunshine during this time. A post about Flo is forthcoming. We love and continue to miss her. Here are some photos taken in Kingston during that week: 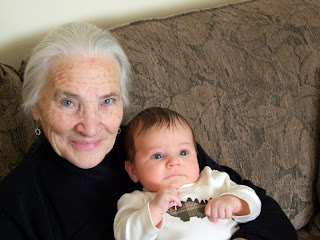 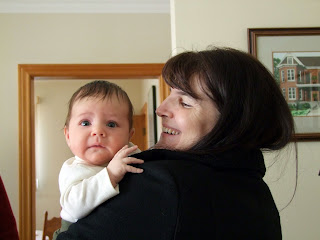 That week also illustrated that the 'modern mom does it all herself' myth is crap and not at all what has been done historically. It was so great to have hordes of family members around - my parents and Dave, Nonna, Aunt Pat, Fred and the girls (who were amazing) and Uncle Serge, Sally and the kids were super with the baby and he was lavished in love. I wish that Flo had had the wherewithal to meet Teddy (by the time he was born, she had really, really faded) but I know that she'd have loved him as much as she did her other nieces and nephew.
My parents and Dave continue to be rockstars, helping with the baby while I combat the pumping/breastmilk fiasco. My parents have been amazing, staying here for days on end and hosting us in Almonte, baby-wrangling and cleaning. They rock, and I cannot thank them enough.
I, on the other hand, have been better. Though I have shed almost all the baby weight (no lie - maybe a pound or so left), I am still struggling with postpartum health issues. The worst has to be with breastfeeding. The months of it can be summarized as follows:
January: struggling with tongue-tie
February: tangling with thrush
March: battling mastitis (and thrush, again, because of the rounds of antibiotics)
April: attemtping to end an abusive relationship -- with the pump.
The battle with mastitis has been constant. The first time, I thought that the early symptoms (just like the flu) were the flu or a cold, so I lost valuable time. It progressed to the point where one breast was totally rock hard and red with infection - the day before my Aunt died. Round one of antibiotics helped, but didn't knock it out. Round two was more successful, but it is a constant battle to prevent milk stasis with my oversupply. And trying to stave off the flu-like malaise is no picnic, either. I have one breast that appears to be prone to plugged ducts, and the vacuum suction of the pump (and the wearing of clothes) is exacerbating the problem. It SUCKS!
So - in the interest of my own health and the desire to be free of chronic infection, I am working on weaning. Not a big deal for Teddy - the content of his bottles will now vary slightly. It is slow going, since the oversupply is INSANE. With the advice of a sympathetic and supportive lactation consultant, I am trying all the remedies to reduce supply - sage, parsley, cabbage in bra, decongestant. I also try to leave some milk behind to signal to my body 'stop making milk', but I have be careful. If I leave too much, it's plugged duct city. GAH!
Teddy is doing well with the DHA-and-EPA-enhanced formula, of which he now gets several bottles a day (the majority if his bottles are still breastmilk for the time being). I have at least a month's worth of milk in the freezer, so he will be able to get a mix of breastmilk and formula until he's over 4 months old. I am fighting not to feel too guilty about this. It has been a constant battle, and I would like to feel healthy again. I have given him a great start despite a slew of problems and I am very proud of that. But my health is important, too. Plus - he deserves a Mom who is more present with him. 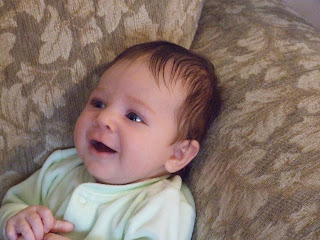 Anyway - that's the scoop. And to end this on a happy note, here's Teddy trying to laugh: